By Gordon Rugg and Amy Martin

In this article, we’ll look at one of these regularities. It starts with a significant insight from an article whose title neatly sums up a key finding, and implicitly raises a key question.

The article is a 1991 paper by Alley and Cunningham in Psychological Science. The title is: “Average faces are attractive, but very attractive faces are not average.” The implicit question is: “Why?”

There’s been a lot of work in this area. In this article, we’ll examine how a simple change in the way you represent the data can give powerful new insights into what’s actually going on, and into what you can do about it.

In this article, we’ll mainly use faces as the subject matter for perceptions of attractiveness, because of the amount of good work in this area.

The technique of averaging faces by superimposing photographs of different faces has been around for a long time. The first examples date from the 1870s.

There has been considerable research into this, broadly dividing into two strands, namely the evolutionary strand, which emphasises symmetry and prototypicality as an honest signal of reproductive fitness, and the cognitive strand, which emphasises the lower cognitive processing load associated with symmetrical and prototypical stimuli. There’s a reasonable overview on Wikipedia.

One point which has been repeatedly raised about photographically averaged faces is that the averaging process produces a face which doesn’t have facial blemishes. This explains some of the apparent paradox in the Rhodes and Tremewan title, but doesn’t really address the part about very attractive faces.

The apparent paradox makes more sense if you tackle the question from a different direction, by treating attractiveness and unattractiveness as two separate dimensions, rather than as opposite ends of a single scale.

Suppose that we now remove facial blemishes from the photos, and have them re-rated. The removal of blemishes reduces the bad points of the photos, but doesn’t add any significant new attractive features. This shifts the values to the left (reduced unattractiveness, but no increase in attractiveness).

This is exactly what happens in software interface design when you remove the bugs from an early design; the “dislike” ratings decrease, but you need to add something new to make the “like” ratings increase. Removing bad features isn’t the same as adding good features.

In the context of product design, you can add good features by using input from the previous evaluation sessions, or by using idea generation methods. You aim for an end point like the one below, where the ratings are all high on liking and low on disliking.

This raises some interesting questions about whether attractiveness is in some way different from the average. We’ll return to these questions near the end of this article.

So what makes something very attractive? We argue that there are two important issues. One involves perceived threat; the other involves novelty. In brief, non-threatening novelty is good; threat is bad; non-novelty is bad. However, deciding whether or not something is threatening can be difficult, and this issue has its own role in attractiveness.

Threat, and the uncanny valley

One key issue is whether something is perceived as potentially threatening or not. As soon as a real threat is involved, there’s a separate dynamic, and attractiveness ceases to be a significant issue.

The word “perceived” is important. An obvious issue is that what would be threatening to one person would not be threatening to another. Less obviously, uncertainty about whether or not there is a real threat has far-reaching regularities in terms of human behaviour.

The phenomenon of the uncanny valley is widely known. It occurs when something or someone is neither clearly human nor clearly non-human. Many classic monsters are of this type, and not just because they’re easy to handle in special effects; werewolves and vampires were in the uncanny valley long before films began. Similarly, there’s a well-recognised risk that attempting to improve an image of a face by filtering out the blemishes may backfire by turning the image into something doll-like in the uncanny valley.

This model has the advantage of bringing together humour and horror into a single framework. It also makes sense of phenomena such as trompe-l’oeil images, which begin by looking like one type of harmless image, and then flip into a different harmless image. We’ll return to this issue later, in regard to novelty.

There are various ways of reducing threat, with regard to perceived human attractiveness.

One route which has received a lot of attention is infantilisation of women; a related route is impractical clothing and footwear for women. An underlying assumption here is that males are threatening. A related issue is that many people use a rigid binary categorisation into male and female, and feel threatened when that categorisation is challenged by e.g. clothing that doesn’t fit neatly into the two categories of “male clothing” and “female clothing”. This is a fascinating topic, but would take us outside the scope of this article.

Another variable which affects perceived threat and perceived attractiveness involves features which are associated with group membership. In the everyday world, this can involve choice of hairstyle, cosmetics, etc, but can also involve features which are more difficult to modify, such as hair colour, eye colour and skin colour.

Researchers into facial attractiveness usually eliminate this variable as far as possible by using photos of faces without cosmetics, jewellery, visible hair, etc, and by using photos which standardise as far as possible for skin colour, eye colour, etc. However, it’s not possible to eliminate completely all the potential signals of group membership which might affect perceptions of attractiveness. We’ll return to group membership later in this article.

So, potential threat is an issue in attractiveness; in the next section we’ll look at how this interacts with the issue of novelty.

It’s trivially obvious that people enjoy non-threatening novelty. It’s less obvious how much novelty someone will want, or when they will want it, and what form it should take. In the next sections, we’ll look at ways of answering these and other questions about novelty.

One tempting conclusion to draw is that people each have their own preferred “sweet spot” for novelty. The reality is almost certainly more complicated. If you investigate how people use music, for example, there’s a strong tendency to use different types of music for different purposes, such as low-novelty music as “wallpaper” when concentrating on a difficult task, and high-novelty music as a “foreground” when listening to music for pleasure.

If you look at novelty across different sensory channels, you also get a strong impression that people’s preferences for novelty make more sense across an extended timescale of days or weeks or longer. What seems to be going on involves periods of moderate novelty interspersed with episodes of higher novelty. There appears to be a similar pattern for arousal levels.

Gordon has previously blogged here about how this can be viewed in terms of sensory diet and sensory self-regulation. The figure below shows a hypothetical plot for one sense across time, with ten time points, varying around a central average.

A hypothetical sensory diet, showing sensory load versus time for one sense 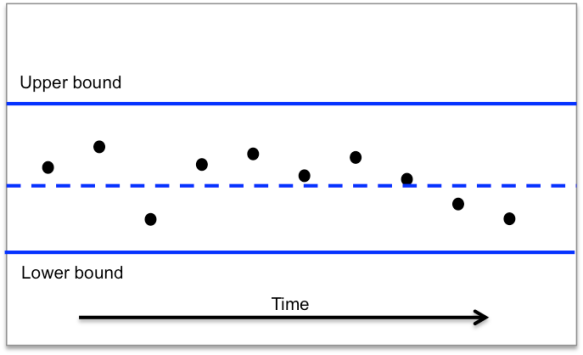 This raises obvious questions about which senses are involved. Human beings have significantly more than the five traditionally recognised senses (sight, hearing, taste, smell and touch). They also have senses such as proprioception, which tells you where each part of your body is even when you can’t see it. Depending on the definition you use, there are somewhere between a dozen and twenty senses (for instance, there seem to be different sensory pathways involved in light touch and in firm touch).

When you start looking at the full sensory package in terms of sensory diet, you start to see the sport/recreation/entertainment industry in a very different way.

Also, interestingly, you start to see relationships to social issues that are usually viewed as belonging to completely different categories. For instance, if you use the same framework of full sensory package and sensory diet, you start perceiving antisocial and marginalised activities in a very different light. You start asking questions about the role of sensory self-regulation in joyriding or drug use or graffiti, and whether this framework might provide a constructive way of tackling these issues. It’s a fascinating topic, but it goes beyond the scope of this article, so we won’t explore it further here.

Information content and novelty; the beauty 2 SDs from the mean

There’s been a fair amount of research into the mathematical regularities that underly perceptions of beauty. An excellent paper by Ramachandran & Hirstein outlined a radically new model of art based on this approach. Unsurprisingly, it was not exactly welcomed with open arms by the established art community, but its content has stood up well to the test of time.

One particularly robust regularity is the mathematical location of aesthetic sweet spots. A simple example in lay language is that being tall or petite is generally perceived as attractive, but being very tall or very petite is not.

More rigorously stated, the sweet spot typically occurs about 1.5 to 2 standard deviations from the mean. Below this point, things are perceived as ordinary; above it, they’re perceived as freakish.

Our phrasing about “generally and “typically” reflects the way that individuals vary in their preferences; the figure of 1.5 to 2 standard deviations is a typical figure, not an invariant law. Gordon has previously blogged here and here about situations where this tendency can be over-ridden by other factors, such as competitiveness for most extreme values. On the whole, though, it’s a solid principle, which hasn’t received the attention that it deserves.

They also make sense in terms of a concept from the humour literature, which is the sense of pleasant relief when an ambiguous situation is disambiguated in a non-threatening way. This is a standard part of the cognitive model of humour. It probably also applies in a milder form to puzzles where there are multiple candidate solutions, and where the solution identifies the correct solution.

Some situations are non-threatening, but don’t have single unambiguous solutions. Gordon has blogged here about non-threatening Necker shifts in design, such as trompe-l’oeil designs, and here about how some types of abstract art can be viewed as part of the same phenomenon.

An approach that we often use is to take a pair of concepts that are usually viewed as opposite ends of a single scale, and then see what happens if we treat them as two separate scales.

The concept of “belle laide” (also known as “jolie laide”) in the top right corner involves someone being unconventionally attractive. A striking example is Cara Delevingne’s much-admired eyebrows, which were very different from the previously prevalent view that female eyebrows should be slim. There’s an excellent example of her eyebrows in action here.

The beautiful people, the ugly people, and the others

Previous articles on this blog about the mathematics of desire

There’s more about the theory behind this article in my book Blind Spot, by Gordon Rugg with Joseph D’Agnese:

Overviews of the articles on this blog: