In a previous post, I gave a brief overview of a widely used, vanilla flavour type of content analysis. It’s far from the only type.

There are methodological debates about most things relating to content analysis, which have been running for the best part of a century, and which don’t look likely to end any time soon. There are, in consequence, numerous different types of content analysis, and many approaches to content analysis. The following sections give a very brief description of some of those other types. I’m planning to write in more detail about them at some point, when there’s nothing more exciting to do…

Grounded theory is an approach which involves trying to have full traceability from each level of categorisation back to the original data.

This has similarities to laddering, which I prefer for a variety of reasons. If there’s a choice, I prefer to gather information directly via laddering, rather than indirectly via grounded theory analysis of texts.

Laddering is cleaner than grounded theory, with a simple but powerful underlying structure that maps well onto graph theory. Laddering can be used to find out people’s mental categorisation, including how a person’s subjective definitions map on to physical reality.

Cognitive causal maps involve using a subset of graph theory to produce diagrams of the networks of reasoning and evidence used within a text. A classic book by Axelrod and his colleagues contains some excellent examples of how this can be applied to significant areas such as reasoning about international politics by politicians, and of how the results from this approach can be used to predict the future actions of individual decision-makers.

Search Visualiser lets you see thematic structures within a text, such as where and how often women are mentioned as opposed to men, or where hesitation words on an aircraft flight recorder are an indication of a problem arising.

This article uses Search Visualiser to look at gendered language in Shakespeare. The image below shows the results for distribution of gender pronouns in Macbeth. 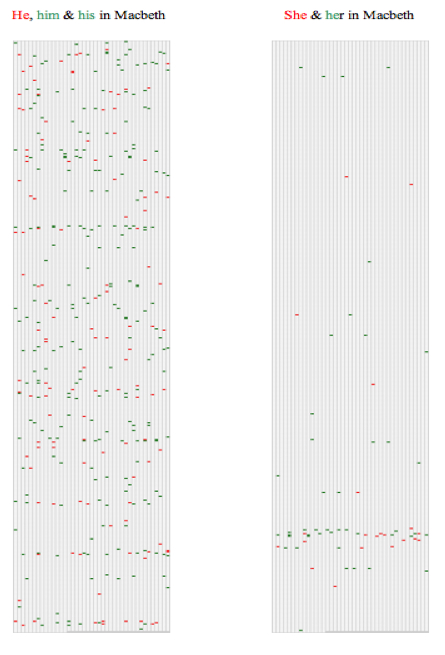 This article looks at hesitation words on black box recorders.

Discourse analysis involves looking at the dynamic aspects of two or more people verbally interacting (whether in a conversation, or a group meeting, or in an email exchange, or in some other medium). This approach can give useful insights into e.g. power structures among the people involved, such as who interrupts whom, and who is able to change the subject being discussed.

Maps, graphs and trees is the title of a fascinating book by Moretti. This brings together a variety of ways of analysing texts, such as showing the spatial distribution of the places mentioned within a novel, or the number of books published within a particular genre over time.

Statistical approaches, including lexicostatistics are useful for fine-grained analysis, and for answering questions such as who might be the author of a particular anonymous work. As with the analysis of black box recordings mentioned above, it’s often the small, insignificant-looking words such as prepositions that give surprisingly powerful insights. For example, in the Iliad, the word “forty” clusters in one section of the story, known as the Catalogue of Ships, which has long been suspected of being a much earlier story fragment that was incorporated into the Iliad; it occurs in a formulaic phrasing. In the Odyssey, in contrast, the word “forty” occurs just once, with no indication of any deep significance. The image on the left below shows where mentions of “forty”occur in the Iliad, in a tight cluster near the start; the image on the right below shows the enlarged detail of the distributions. 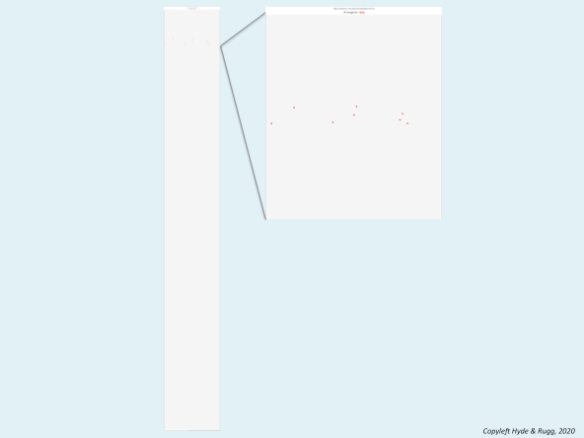 Story grammars are powerful formalisms for analysing the plot structures of stories, including books and film scripts. The classic early work was done by Vladimir Propp; his approach is still highly relevant today. This approach involves stripping away the surface features, such as the characters’ names, and focusing on the deep structure underneath.

Content analysis is about categorisation and representation. Categorisations and representations have power; not only do they show where balances and imbalances occur, but they can also provide new ways of thinking about a topic (as in our recent articles about treating concepts as separate axes rather than opposites). In addition, they can be invaluable for spotting significant absences.

With the appropriate choice of categorisation and representation, content analysis has a lot to offer. I hope you’ve found this article useful.

There’s more about content analysis in my book with Marian Petre on research methods:

There’s more about the theory behind this article in my book Blind Spot, by Gordon Rugg with Joseph D’Agnese.