This article is the second in a short series about finding out what people would really like in life.

The obvious approach doesn’t work very well. If you just ask people what they want, you tend to get either no answer, because people don’t know, or to get low-aspiration responses, for various reasons that are well known in requirements acquisition research.

If, however, you instead show people a range of possibilities, including possibilities that they would probably never have thought of, then their preferences can change dramatically.

This series is about showing people a range of possibilities via images of buildings, which are intimately linked with a lot of other lifestyle choices.

In the first article, I looked at artistic representations of future and fantasy buildings, to see what trends emerged there, and what they could tell us about people’s desires. One trend that emerged strongly was for those buildings to be awe-inspiring, with lofty towers and huge portals.

This, however, raises one of those issues which are so familiar that we seldom think about them. Why are lofty towers and huge portals awe-inspiring in the first place, given that they can be wildly impractical?

Part of the explanation involves human cognitive biases and human preferences, which are the subject of this article.

In this article, I’ll look at those topics, and look at their implications for competition and change, with particular reference to concepts and literatures that give deeper insights into what’s going on.

From humility to hubris: Doors and desires 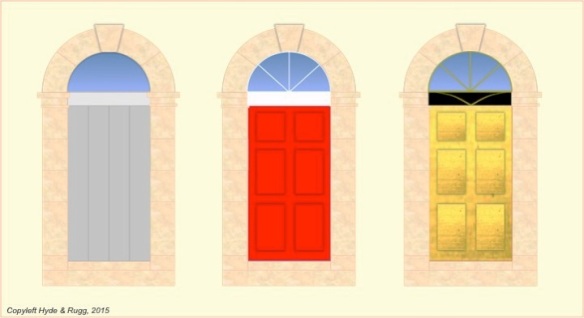 The mathematics of desire

I’ve written previously about regularities in what people tend to like. In some cases, more is better, with no upper limit. This is the superstimulus effect, which occurs throughout the animal kingdom.

In some cases, though, people appear to prefer things that are a particular distance from the statistical mean average. For example, there’s a solid body of evidence that being tall brings more status and wealth, but that being very tall doesn’t. Translating that into statistical terms, the optimal height for status and wealth is somewhere between one and two standard deviations from the mean. There are similar figures for features such as the preferred ratio of leg length to torso length.

So which types of preference occur where? In the tables below, I’ve listed some common patterns in people’s preferences. I’ve given these patterns names from popular culture which make the underlying point clearly.

The first set of preferences are based primarily on social factors, rather than on the products involved (e.g. buildings or cars or whatever).

The list below shows some common social factors in preferences:

“There can only be one” involves having something that is in some way better than what everyone else has; for instance, the biggest house in the street, or the most expensive car. This is a recipe for competition; in the case of buildings, there is competition among architects to build the tallest skyscraper. The significance of this should become clear later in this article.

“Bigger than yours” is what you might expect; it’s a purely comparative assessment, relative to the other person involved. This is another recipe for competition.

“Blending in with the crowd” is a common strategy. It involves appearing average, and not being a “tall poppy”.

“Humble” is a strategy that can occur for various reasons. Sometimes it involves choosing to be below average on one criterion in order to be above average on another criterion (for instance, ascetics who have as few possessions as possible, in order to have as much spiritual purity as possible). Sometimes, the reason is an extension of “blending in with the crowd”. In many parts of the world, for instance, house owners deliberately let the exterior of their house look shabby and dilapidated, because this will reduce the risk of criminals or tax inspectors deciding that their house is worth closer investigation.

That’s one way of looking at preferences. Here’s another, this time centred on the products themselves, rather than on what other people are doing.

“As much as possible” is what it sounds like; for instance, the fastest car that can be bought. This approach is different from “there can only be one” because the focus is on the product itself, not on whether anyone else has that product.

“Criterion-based” can take various forms. One example is brand-based preference; for instance, buying Apple products. Another example is the trophy, where there is a clear objective criterion for what constitutes a trophy (e.g. the weight of the fish in angling, or the height of a mountain in Munro-bagging, which involves climbing Scottish mountains over 3,000 feet tall.)

“Two SDs above the product mean” is the equivalent of “a fast car, but not a very fast car”.

“Average” is what it sounds like (with the usual statistical caveat about there being three different ways of defining “average”).

There’s also a third way of categorising preferences, which is based on how to choose the product.

There’s a classic distinction here, from Herb Simon’s work on decision theory. It’s between optimising and satisficing (sic; probably a combination of satisfying and sufficing).

Optimising involves finding the best product (or process, or whatever) for the task in question. Usually, this concept is used when there are two or more criteria for defining what is “best” and you have to juggle one criterion against the others (for instance, balancing cost against quality). Although this looks like the obvious best approach to use, reality isn’t that simple. Often, there aren’t any solid objective ways of deciding which criteria really matter, so your choices end up being quite subjective. Another problem is that gathering all the information you need can take a lot of time and effort.

Satisficing also involves juggling two or more criteria, but instead of trying to find the best solution, satisficing involves finding a good-enough solution. Usually you decide in advance what you will consider to be good enough. The great advantage of satisficing is that it’s quick; you simply choose the first product you find that meets your criteria.

So, what are the implications for trying to identify and to build people’s dream lifestyle?

This doesn’t necessarily mean that sustainable lifestyles are inherently impossible because of human competition. There are various ways of handling the inherent instability, as outlined below.

One useful literature in this context is game theory, which I’ve described in a previous article. A related literature deals with systems theory, which I’ve also described in a previous article. The two approaches complement each other neatly, and they provide a rigorous, powerful set of methods for understanding competition and the ripple effects from the competition.

Another useful approach is Transactional Analysis (TA), developed by Eric Berne, and described in fascinating, very readable books such as “Games People Play”. The “games” in the title are actually strategies, such as the “bigger than yours” strategy described above. TA looks at these strategies in depth, including analysis of what happens when a strategy becomes pathological and of what can be done about it.

In addition, laws are an effective way of fixing the limits to competition; for instance, planning regulations. If there are fixed limits to how big a house can be, then “bigger than yours” players can either limit themselves to buying a bigger house from within the existing housing stock, or can shift their competition to some other topic of comparison.

Product-centred and choice-centred factors have a very different set of implications from social factors. They take us into topics such as client requirements and task analysis, which will be the topic of a later article in this series.

Both of those topics have an uneasy role within architecture. They are clearly important, and they play a part in some of the legislation and regulations within which architects have to work. However, architects are well aware that within the planned lifetime of a building, technology and tastes may change dramatically. A classic example is nineteenth century architecture designed with horses and carriages in mind. Architects understandably don’t want to spend a lot of time and effort on finding ways to fit within constraints that might no longer be relevant within a few years.

It’s an understandable feeling, but it’s a simplification. In the next article, I’ll look at design constraints and at changing tastes. They are fine, rich topics, that will take us into areas such as classic military architecture, categorisation of barns, and the role of pointy sticks in modern life.

There’s more about the theory behind this article in my latest book:

“There can only be one:

“Hard to be humble”:

Overviews of the articles on this blog:

7 thoughts on “People in architectural drawings, part 2; the mathematics of desire”