Movies wilfully ignore and distort facts and truth for a wide range of reasons, most of them all too familiar. The usual suspects include:

In this article, I’ll resist the temptation to rant at length about those reasons, and will instead look at a less obvious problem which has some interesting underlying theory. It takes us on a journey across thousands of years of art, via some detours into geometry. It’s a variant on the problem of social perspective clashing with linear perspective (which might possibly be why it hasn’t received much attention in the past). Anyway, here’s an image that incorporates some key examples, after which I’ll unpack the concepts involved, and briefly outline some of their implications for cinema and for the wider world.

This article was inspired by a well-informed YouTube post by scholagladiatoria on the shortcomings of a classic swordfight scene in the 1977 movie The Duellists.

The post was mainly about the positions adopted by the two duellists, where the swords were held high, rather than with the hilts around waist height. (I’m using the still image below under “fair use” policy, as a low-resolution single image being discussed for academic purposes.) 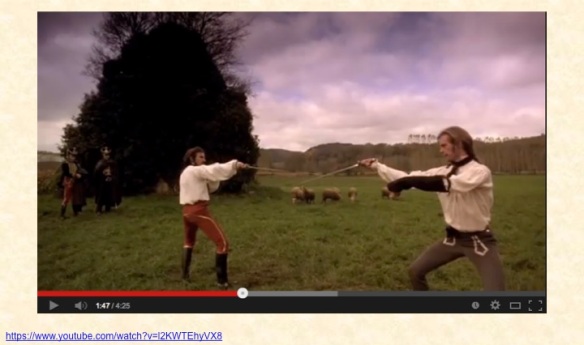 As is often the case with obscure technical details, there are arguments for and against the original post; the comments section on the article contains detailed and courteous discussions of whether or not that particular high demi-quarte engaging guard was common in the Napoleonic period.

As is also often the case, one of the points in the original post sparked a memory of something from a very different field that gives a new possible perspective. That “something” is the problem that artists faced when trying to handle two conflicting conventions in paintings. Although this problem sounds about as esoteric as a problem can be, it’s just one manifestation of a problem that occurs in a wide range of fields. I’ll discuss the art case first, and then look at the broader implications.

The problem looks simple. If there are two or more people in an image, and the people are shown as different sizes, what do the different sizes mean? Here’s an example (original image cropped to show detail).

It’s a detail from one of the earliest major works of Ancient Egyptian art, the Narmer Palette. The tall figure to the left of the picture is a pharaoh, wearing the distinctive double crown. The other figures come in at least two sizes. What do the sizes mean? There are several possibilities, including the following:

This convention made a lot of sense in a status-conscious ancient world that wasn’t too bothered about literal accuracy in images. Throughout most of history, the artist’s job was to depict whoever was paying them in as flattering a way as possible. There were some exceptions, such as Amarna style in the reign of Akhnaten, and classical Roman portrait busts, but on the whole, any artist who knew what was good for them would keep well clear of being too accurate in their portrayals of powerful patrons.

The reason that it’s amusing is our old friend, ambiguous parsing of a non-threatening image.

This image is using one convention for what size means (i.e. social status of the person depicted) on one side of the picture, and a different convention for what size means (i.e. relative physical sizes of people and objects being depicted) in the other. The two conventions are incompatible, unless the artist does some very careful juggling of the composition, such as having the most important people in the foreground and the less important people in the background, at distances proportional to their importance.

The next image shows what happened after a Renaissance genius called Filippo Brunelleschi tidied up the underlying theory of what’s now known as linear perspective. It’s a set of geometric principles that tell you how big a given object will appear at a given distance, if you’re portraying it realistically. These principles were enthusiastically adopted by the major artists of the time, as in the image by Perugino below.

If ever a picture sent a message of an artist having fun with a brand new toy, in the form of a new set of rules for handling perspective, then this picture is it.

Linear perspective is now the dominant convention in Western art, and has been since the principles were formalised back in the Renaissance.

So, that’s a brief overview of perspective and relative proportions in art. What does this have to do with movie realism?

Back to movie conventions

The thing that struck me when viewing the YouTube post about The Duellists was that the film’s director would quite possibly have been faced by a very similar problem to the ancient artists, in terms of trying to juggle two mutually contradictory sets of conventions.

One set involves historical and physical realism. Ridley Scott paid a lot of attention to this in the movie, and was much praised for it.

The other set involves cinematic conventions for depicting emotion. For instance, a low angle shot of the protagonist outlined against the sky is a cinematic convention for showing that character as heroic; conversely, a high angle shot from above and at a distance shows the same character as relatively insignificant. Directors also use close-ups of the protagonist’s face, or sometimes hands, so the audience can see the emotions (e.g. a twitch of the eye, or a nervous tremble of the hand); long shots hide that information.

So what happens when you want to show the audience the emotion that a major character is feeling in a duel? You’ll probably want to show close-ups of their face, and quite possibly of their hands as well, if you can. So far, so good.

What happens, though, if historical accuracy means that the main swordplay in the duel occurs at a level that distracts the audience’s attention away from the character’s face? A lot of the attacks in real sword fights were aimed at the legs; a lot of stances involved holding the hilt of the sword around waist height, so the tip of the sword would be in front of the fighter’s face in a way that might be distracting to the audience.

In these situations, there’s a strong temptation to have the character use comparatively rare moves that work better for the camera. It’s not telling a lie, but nor is it the complete truth.

In the case of The Duellists, having the actors use this high guard position means that all the physical and emotional action is happening in a single line of sight, rather than being distributed across the screen. It’s a neat solution, though at the price of pushing the boundaries of historical realism.

Conflicting conventions in art and film are usually little more than an annoyance to some of the audience.

In other areas, though, such as design, they can have much more serious consequences.

At least two aircraft crashes were caused by designers having to choose between two conventions for instrument layouts which were both perfectly sensible, but which were mutually incompatible. When pilots trained on one layout switched to an aircraft that used the other layout, it was only a question of time before something went wrong.

At a less traumatic level, this issue crops up every time you have to write the date on a form. There are at least half a dozen possible conventions for the order and format of the date, month and year, and most of them seem to be in active use somewhere or other. Again, they’re logical and sensible (well, most of them at least) but they’re mutually contradictory.

There often isn’t a brilliant solution to this problem of mutually conflicting conventions, but being aware of the problem improves the chances of finding a solution if there is one. This is another theme to which we’ll return in later articles.

The Duellists is a beautifully made film, with an intelligent script and excellent performances, as well as considerable attention to detail. It’s well worth watching.

The film is based on a short story by Joseph Conrad, based on the true story of two French Napoleonic officers who fought thirty duels against each other over the course of almost two decades.

4 thoughts on “Why Hollywood gets it wrong: Conflicting conventions”