By C.J. Caesar, with Gordon Rugg

Here’s Caesar writing about wildlife again. By way of a change, this description isn’t particularly weird – there are no elks without knee joints, and no unicorns. It’s about the aurochs, a now-extinct form of wild ox.

XXVIII.-There is a third kind, consisting of those animals which are called uri. These are a little below the elephant in size, and of the appearance, colour, and shape of a bull. Their strength and speed are extraordinary; they spare neither man nor wild beast which they have espied. These the Germans take with much pains in pits and kill them. The young men harden themselves with this exercise, and practice themselves in this kind of hunting, and those who have slain the greatest number of them, having produced the horns in public, to serve as evidence, receive great praise. But not even when taken very young can they be rendered familiar to men and tamed. The size, shape, and appearance of their horns differ much from the horns of our oxen. These they anxiously seek after, and bind at the tips with silver, and use as cups at their most sumptuous entertainments.

(Original images from wikimedia and wikipedia; details below)

Here’s another example, which shows more clearly how attractive the horns could be. The horns were huge – they could reach nearly three feet in length. 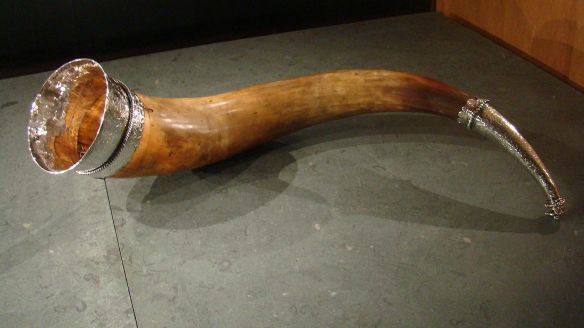 What he says about the speed and ferocity of the bulls is corroborated by numerous other sources, up till 1627, when the last aurochs died.

So, where does that leave Caesar?

We’ve had the story about hunting elk by taking advantage of elk (according to Caesar) having no knee joints, and sawing partway through the trees that the elk sleep leaning against, so the trees fall over when the elk lean on them. Not exactly high in credibility.

We’ve had the story of the unicorn, which sounds like a garbled description of a reindeer – maybe based on a sighting of a reindeer that had shed one antler but still had the second antler. That’s plausible.

We’ve also had his account of the aurochs, which tallies pretty well with the other sources of evidence, and is an accurate description even where it initially looks suspicious to a modern reader (in particular, the size relative to an elephant).

So, overall, it’s a bit of a mixture, as regards accuracy and distinguishing personal observation from reports of what the locals told him.

In the next set of posts about odd animal stories, I’ll be looking at three stories from Herodotus. I’ll then look at deeper issues about historical records, reliability, and rhetorical devices, using these animal stories as examples.

The image showing relative sizes of North African elephants, aurochs and humans was assembled from parts of the images below.

1 thought on “Caesar on the aurochs”