To what extent does the language of Shakespeare’s plays indicate a male-dominated world? One way to see is by looking at the distribution of gendered words within the texts.

The figure below shows the location of the words he, him, his, she and her in Midsummer Night’s Dream. Each of the tiny rectangles represents a word in the text; the coloured words represent the keywords, and the blank rectangles represent the other words. This representation ignores linebreaks in the original text. The images are roughly equivalent to a miniaturised image of the text laid out as a scroll, with the keywords marked with coloured highlighter.

In each pair of images below, the nominative forms of the keywords are in red, and the other forms such as accusatives are in green, to show whether one gender appears more often in an active role.

(Apologies to any readers who are red/green colour blind; the Search Visualizer software itself takes account of colour blindness in its options, but shrinking the images down to fit into blog format loses the contrast.)

There are more male pronouns, but the difference is not huge; both male and female pronouns occur frequently throughout the play.

Here, for comparison, is the corresponding figure for Romeo and Juliet.

END_OF_DOCUMENT_TOKEN_TO_BE_REPLACED

I’ve recently started looking at the Plowden Report, mainly because of my interest in sociotechnical issues. The method I was using may be interesting and useful to readers, so this article is a quick overview of the method.

I’ve been using the Search Visualizer software, which is available free online. (Declaration of interest: I’m co-inventor of the software.)

The software shows you where your chosen keywords occur within a text, representing each keyword as a colour-coded square, as if you’d gone through the document highlighting every occurrence of your keywords, and then miniaturised the document so you could see large sections of it at a time.

This is particularly useful when you’re dealing with very large texts, since it allows you to see patterns of distributions. It turns out, for instance, that there’s a fair amount in Plowden about furniture, and that most of those mentions are in one section of the report.

The image below shows where the word “classroom” appears (green dots) at the start of Volume 2 of Plowden.

END_OF_DOCUMENT_TOKEN_TO_BE_REPLACED

This is the 100th post on the Hyde & Rugg blog. We’re taking this opportunity to look back at what we’ve covered and look forward to what comes next.

The image below shows some of the main themes and outputs so far, in the “knowledge cycle” format that underlies our Verifier framework for tackling human error. If you’ve come to this blog after reading Blind Spot, you might be pleased to discover that we’ve been covering the contents of Verifier here in more depth than was possible in the book, and that we’re well on the way to a full description.

In the image below you can see some of the main themes and topics we’ve covered so far in the “knowledge cycle” format that underlies our Verifier framework for tackling human error. If you’ve come to this blog after reading Blind Spot, it’s worth knowing that we’ve covered some of the the contents of Verifier in more depth here than was possible in the book, and that we’re well on the way to a full description.

The knowledge cycle, and topics that we’ve blogged about 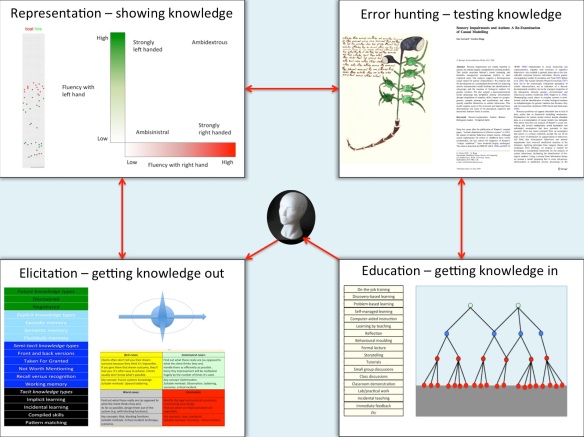 END_OF_DOCUMENT_TOKEN_TO_BE_REPLACED

In the first part of this pair of articles, I looked at the general principles that linguists use when trying to identify a previously unknown language.

In this article, I’ll look at what happens when you apply those principles to the Voynich Manuscript.

In brief, it doesn’t end well for the idea that the manuscript is written in an unidentified language. That idea was tried and rejected by the specialists decades ago, for very good reasons. Anyone trying to resurrect the “unidentified language” theory needs to show that they’ve found a convincing set of counter-arguments to those reasons for rejection. So far, nobody’s come close; instead, the recent theories simply ignore the show-stopping problems.

Here are some of those reasons.

(Image courtesy of the Beinecke Library.)

END_OF_DOCUMENT_TOKEN_TO_BE_REPLACED

I have an art exhibition opening next week in Keele University, which will feature some of the topics that we’ve blogged on here.