One of the favourite activities of bureaucrats and of bigots down the ages is fitting people into pigeonholes. This has caused a lot of misery down the ages.

It’s still pain, though, just as much as the pain caused by categorising people into in-groups and out-groups, which was the topic of an earlier article. To add insult to injury, it can also feed into a vicious cycle where problems with pigeonholes and problems from prejudice can each exacerbate the other.

In this article, I’ll be looking at pigeonholing, and people who don’t fit in, and how this issue maps onto the bigger question of how humans make sense of their world and of each other.

As a positive closing note, I’ll also be looking at some examples of bureaucrats using pigeonholes in the cause of good. It can happen…

For every messy, complex problem in the world, there’s at least one person with a clear, simple proposed solution whose only major drawback is that it’s wrong.

Some people have those clear, simple, wrong ideas as a result of bigotry, which is keen on clear, simple dividing lines.

Some people have those ideas because of being novices; novices often have endearingly simplistic beliefs about how the world works.

Whatever the cause, if a simple, clear, wrong idea becomes enshrined in official policy and legislation, then the rest of us have to deal with the consequences. Sooner or later, those consequences will lead to a new set of pigeonholes that human beings have to be crammed into one way or another.

The image below shows the problem schematically. The System expects you to fit into one or other of two pigeonholes: the square white pigeonhole or the square black pigeonhole. That’s not going to be an enjoyable process if you’re a red oval. 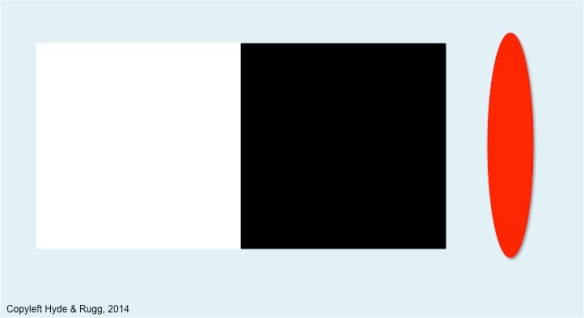 There are plenty of examples of binary either/or pigeonholes, and of people who don’t fit neatly into those pigeonholes, or who honestly don’t know which they are supposed to fit into.

For instance, if you’re at the decree nisi stage of a divorce, do you fit into the “unmarried” or the “unmarried” category in an official form? Most bureaucracies will have a policy on this, and you’ll probably find that policy buried deep in the “guidance on filling in this form” notes that accompany most official forms. They tend to be long, detailed notes, because the world is a weird, untidy place, and is full of cases that don’t fit neatly into binary boxes.

One of my favourite factoids is that a survey in the 1990s found that 0.5% of people in the UK did not know whether or not they owned a motorbike. Another of my favourite examples is the man listed in the Domesday Book as owning one and a half ponds.

When you stop and think about these examples, you can soon find perfectly sensible reasons for them. For instance, suppose that you’re in the process of buying a motorbike on hire purchase but haven’t made the last payment yet, or that you’ve bought a scooter; would either of those count as “owning a motorbike”? Similarly, the 0.5 of a pond might be because of joint ownership with someone else. However, they’re not cases that the average person designing a form or a questionnaire would think about.

So how do systems and people handle cases that don’t fit?

The Victorian middle and upper classes were keen on this strategy. It didn’t work out too well, as Oscar Wilde could testify. More recently, this was at the heart of the “Don’t ask, don’t tell” policy in the US military. That also wasn’t exactly a resounding success.

As in the image below, you might be able to conceal a lot of the cases that don’t fit, but there will always be some that you can’t conceal; for instance, the activists who stand up and ask why they should be forced to fit into categories derived from someone else’s bigotry. 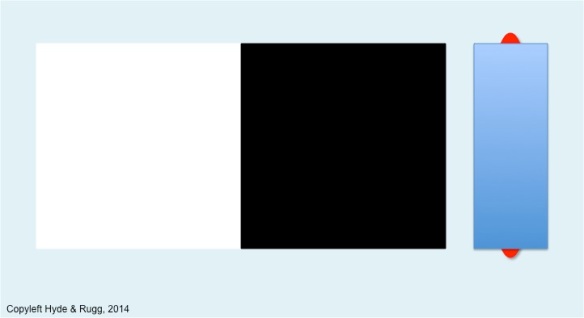 Strategy 2: Force them in arbitrarily

One way of handling the “red oval” problem is to ignore it, and arbitrarily allocate people into one box or the other, as shown in the diagram below. 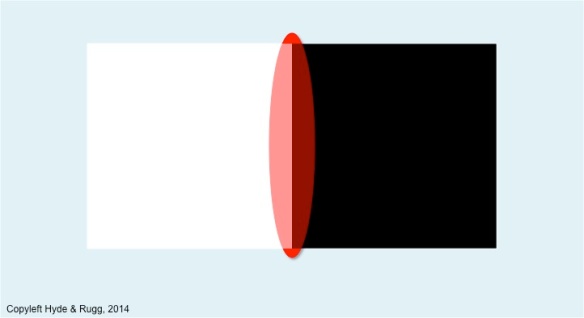 For example, a lot of forms expect you to fit your name into two boxes, one for your first name, and the other for your family name. That’s fine for many Europeans and Americans, but there are plenty of people whose names don’t follow that pattern.

The usual example is Icelandic names, where the surname for a male consists of his father’s first name with the suffix meaning “son” added, and the surname for a female consists of her mother’s first name with the suffix meaning “daughter” added. This means that in a family of two parents plus a son and a daughter, each family member can have a different surname.

I once witnessed the consequences when medical staff had used arbitrary allocations of family names in a similar case. The confusion was on an epic scale…

At one level, you can usually work round these problems via some minor creative thinking and some major notes on how to fill in the forms; it’s no accident that bureaucracies are big on systematic procedures.

At another level, though, this can rankle; the implicit message is that the person’s culture is subservient to the culture that produced the form, or is being treated as not worth making provision for within the form. It’s the sort of small, galling, but ubiquitous symbolic issue that can fuel a smouldering larger resentment that eventually bursts into a flame of revolt.

Something that’s often overlooked is that these problems are also annoying to the bureaucrats who have to resolve them. Even when the people being crammed into the pigeonholes are genuinely trying to help, they’re still causing problems for the bureaucrats, and many bureaucrats resent this. This resentment can easily morph into blaming the victim, and into wondering why Those People are so insistent on their silly conventions, as opposed to our fine, sensible, natural way of doing things (that last part was ironic, just in case any readers miss the point…)

This leads us on to another common strategy, whose name was inspired by a line in the St Trinian’s school song. (Yes, this is more grim humour, in case you’re wondering.)

Trampling on the weakest

One strategy often used by dominant groups is simply to ignore the cases that don’t fit in the pigeonholes.

This is different from pretending that they don’t exist; instead, it involves being perfectly well aware that they exist, but making no provision for them. Anyone who chooses to conform can do so; anyone else is excluded from the dominant society, and the privileges and opportunities that go with it. 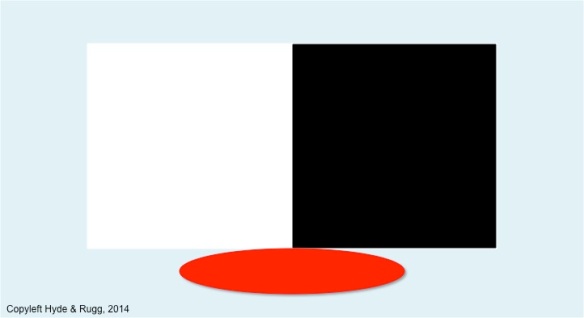 It’s a brutally simple piece of Realpolitik in the short term, and a recipe for social unrest and revolution in the long term.

One frequently-noted feature in the Roman Empire’s longevity is that the Romans were generally very good at accommodating the most culturally sensitive topics among conquered nations. The Romans didn’t care which gods you worshipped or how you dressed or what language you spoke at home, provided that you were willing to pay your taxes, obey the laws, and use Latin as a practical working language for official business.

The Romans were very far from perfect, but this is one area where their shrewd pragmatism avoided some of the problems that could have arisen for a more ideologically-driven culture.

The previous sections don’t portray bureaucrats in a very flattering light. However, as with any other group, bureaucrats aren’t a homogenous mass, and there are some noteworthy examples of bureaucrats using their powers to help people, up to and including saving human life.

A more individual example from World War II was Giorgio Perlasca, who saved thousands of Jews from the Holocaust. In one of those stories that would be unbelievable if it weren’t true, he ended up posing as a Spanish embassy official in Hungary, despite being Italian, and used assorted bureaucratic devices and legal loopholes to hide Jews from the Axis forces.

My final example brings us full circle. Wise bureaucrats are well aware of the advantages of having room for manoeuvre, rather than being forced into constrictive categorisations that will probably lead to long-term problems for them and their systems.

One way that they give themselves manoeuvring space is by adding another category. Used badly, it leads back to the problems in the previous article about out-groups. Used well, though, it can let everyone involved find a mutually agreeable solution.

It’s the category of “other”…

I’ve indicated specialist terms from other fields in bold italic. All of the specialist terms I’ve used in this article are well covered in easily accessible sources such as Wikipedia, if you’d like to read about them in more detail.

There’s more about the theory behind this article in my latest book:

There’s been a lot of research into bureaucracies and bureaucratic behaviour; the seminal work was by Max Weber:

I’ll be writing more about this at some point.