There’s a new claimed decipherment of the Voynich Manuscript, by Stephen Bax. In this blog article, I’ll report what the proposed decipherment claims, as far as possible in Bax’s own words, using screenshots to ensure as much accuracy as possible.

Here’s how it’s described in the press release from his university. I’ve trimmed detail from the middle, for brevity.

(Update: Some users have had problems with the link above; you might find it easier to use a search engine and follow the most recent link to the story.)

First, the extent of this claimed partial decipherment. Here’s how many words Bax claims to have provisionally deciphered (detail from the complete abstract of his online article, available at his http://www.stephenbax.net website). The italics are in the original Bax article.

If I’ve understood the abstract correctly, the article claims a provisional decipherment of ten words.

Here’s the entire abstract, to make the context clear. 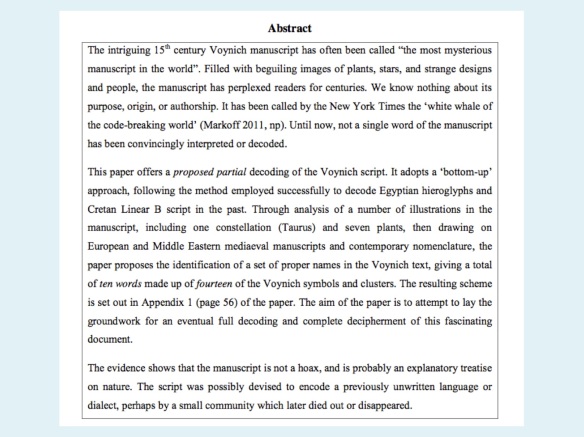 To put the ten words in context, here’s the length of the Voynich Manuscript given in the introduction to his article.

So that’s ten words possibly identified out of 240 pages.

Next, the methodology used in the paper.

He also used another method as a double-check. Readers interested in the technical details of research may be interested in his footnote 11. 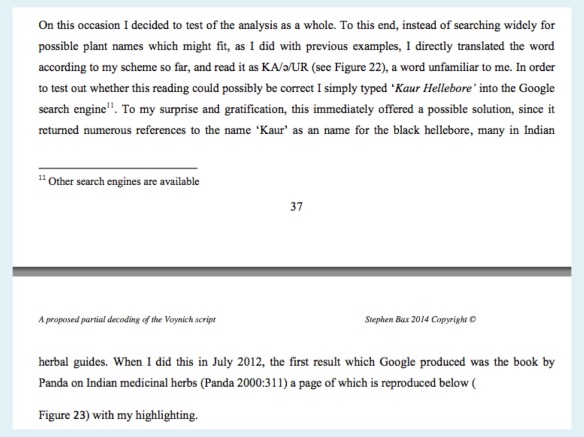 The result claimed in the article was provisional decipherments of the names of seven plants, and of the name of the constellation Taurus, with ten words claimed to be deciphered in total.

The next steps for future research that the article proposes in its closing section are as follows. 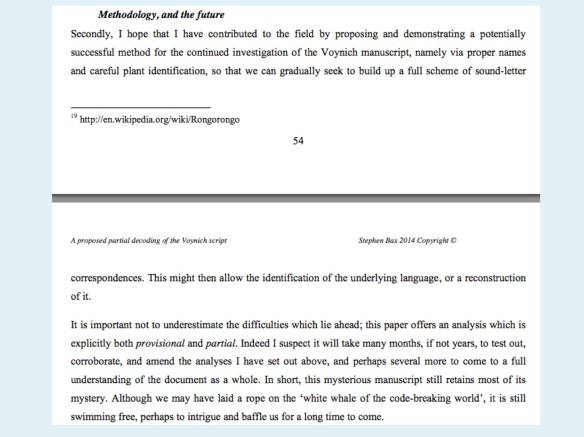 In summary, I do not find this a convincing decipherment, but others may have different opinions.

I have used screenshots from the press release and the Bax article under fair use principles, since both documents are already in the public domain, and this blog article is an academic commentary on the work described.