This article is about how you can use these words to get an extra dimension of information about real-world problems.

Two of my interests are product requirements/evaluation and human error, particularly in safety-critical systems. In both these areas, careful attention to the apparently insignificant words can be extremely useful.

Some of the information that you get with think-aloud technique is easy to handle – for instance, if the response is along the lines of “I really love this feature” or “I hate that feature”. Because you’re getting this information in real time, without distortions due to memory, you easily can get at issues that would be missed or distorted in interviews, questionnaires and focus groups, which typically happen after the event.

Other important information, though, is easily missed if you don’t know what to look out for. A classic case is when a user hesitates while trying to use the product, because they’re confused. If that’s happening, then the design needs to be improved, so that users won’t be confused in future. So, it’s important to find out where the users are getting confused.

There are similar issues in human error, where accident investigators often need to find out where things started to go wrong. Again, what often happens is that there’s a key point where the participants in the accident suddenly realise that they don’t know what’s happening.

The image below shows an example of how you can spot that key moment by looking at one particular small word. I’ve used the Search Visualizer software to look at some transcripts of cockpit dialogue, from the voice recorders in black boxes after air crashes. In brief, the red dots show where that word appears in each transcript. The word is “um”. 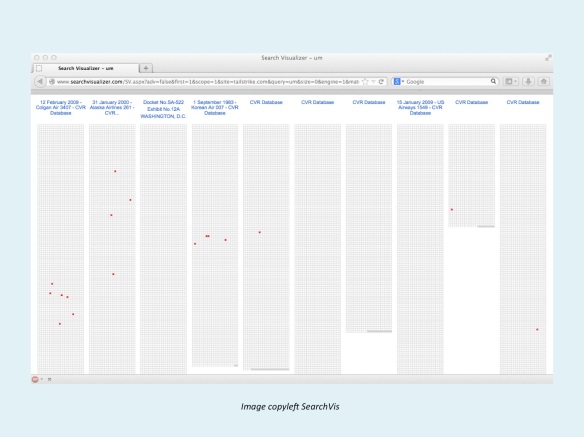 The interesting cases are the first and the fourth transcripts. I’ll focus on the fourth, because it’s such a clear example of the principle. The image shows the complete transcript, and it shows that there’s a sudden cluster of occurrences of the hesitation utterance “um” about halfway through. What’s happening there?

The image below shows the area of transcript immediately surrounding those four instances of “um”.

Before this section, the dialogue is very calm and mundane, with a lot of discussion of customs procedures. Then at 10.45 there’s the sudden “Um Um We are now having an unexpected strong tailwind”. For the next few minutes there’s a lot of questions and uncertainty, and then after this chunk of transcript, everything calms down again.

So, in summary, small words can tell you a lot, if you know what to look for, and if you have an exact record of what is being said. This is one reason that professionals in this general area tend to take a hard line about the quality of transcripts. If you’re using a transcript made by someone else, you soon discover that a surprisingly high percentage of would-be transcribers will mangle the transcript by leaving out occurrences of “um” and “er” and similar utterances. Another common mistake is leaving out swearwords. Swearwords are a valuable source of information, particularly when they only occur a few times in a transcript; they tell you that something is triggering a strong reaction, and if there’s a strong reaction, then you need to know what that something is. Yet another common mistake is attempting to tidy up the grammar. You need to know if the speaker is suddenly becoming less coherent, because that can be a key piece of information.

There are other things that you can tell from small words – there are entire disciplines, such as identifying who wrote a particular document, that rely heavily on what those small words can tell you. That, though, is a topic for another article.

For the example in this article, I used the Search Visualizer “match whole word” option, combined with the “Single site” option, on the tailstrike.com site.

The Search Visualizer blog contains more information about ways of using the software:

9 thoughts on “When small words mean a lot: Transcripts, black boxes and evaluation”