By Gordon Rugg and Gavin Taylor

So why should anyone care about a short cipher that was published in a 1939 textbook? There’s a good reason, and it’s very different from the reasons for caring about the Voynich Manuscript.

With the Voynich Manuscript, there was a tantalising possibility that it might just be the key to a new approach to code making. With the D’Agapeyeff Cipher, the issue is about code breaking.

If you’re a codebreaker, then one of the things you hope for is large quantities of coded material, which give you a better chance of finding those few key points where the code is weak, so you have a chance to break in. Unfortunately for codebreakers, that doesn’t always happen. Often, you’re having to deal with a small quantity of text, but that text is important – maybe a warning of an imminent attack – so codebreakers are very keen to have better ways of getting into short coded texts.

The D’Agapeyeff Cipher is a classic test case for new ways of tackling this problem. It’s short; it was almost certainly written using one of the codes described in the book where it appears; it’s still uncracked, over seventy years later. Gordon had already had one attempt at cracking it, with his student Stephen Antrobus, using a method suggested by our colleague Dr Robert Matthews. It was a high-tech software approach that hadn’t been widely used for this type of problem before. It was well worth a try, and Stephen did an excellent job of building the software, but it didn’t crack the code. We’ll return to that story in a later episode.

So, this time round, we tried a different approach. We still started in the same place, though. Gavin bought a second-hand copy of the first edition of D’Agapeyeff’s book Codes and Ciphers.

The first edition of Codes and Ciphers isn’t like that. It’s a respectable, very ordinary hardback book from the 1930s. The reason Gavin bought a first edition was that the first edition contains the D’Agapeyeff Cipher. It’s the only edition that does.

The background story of the first edition gives some potentially useful clues about the cipher. The author, Alexander D’Agapeyeff, was Russian-born, but had moved to Britain when young. He became a successful cartographer (map-maker) and wrote a book on the topic.

With the increasing prospect of a major war, his publishers decided that it would be a good business move to publish a book on codes. They didn’t have a suitable cryptographer for the project, so they asked D’Agapeyeff if he could write one. It appears that he had a reputation as a safe pair of hands. His book was published in 1939, the year that war broke out, and did well.

Codes and Ciphers works methodically through the main coding approaches from history until the time when the book was written. It’s clear and readable, and it has worked examples throughout. At the end of the book, there’s a puzzle to test the reader’s knowledge. Here’s what the last page of the book looks like. 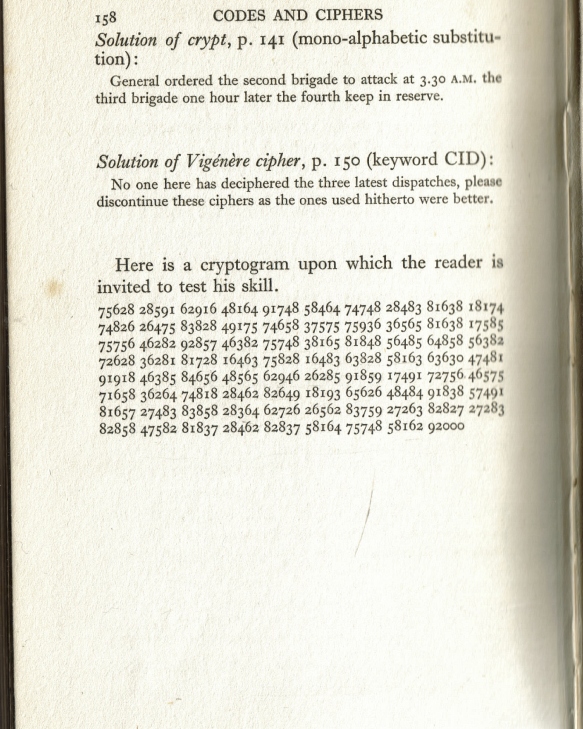 Up till this point, everything in the story is very ordinary; a textbook with worked examples and exercises for the reader.

Over the following years, though, the story takes a very different turn. Cryptographers realised that nobody had managed to solve that final puzzle. In isolation, that wouldn’t have been a big issue, but in context, it brought home the point that codebreakers didn’t have a good way of cracking short coded texts without further information, such as what type of code was being used, or what the likely subject matter was.

Cryptographers grappled with the problem for a while, and then people started admitting to D’Agapayeff that they couldn’t crack his cipher, and asking him what the solution was.

D’Agapayeff’s response was to admit that he couldn’t remember. There’s no reason to doubt his story; his son recalls D’Agapeyeff being extremely embarrassed about the whole business. The cipher was quietly omitted from the next edition of the book, but it continued to attract the attention of codebreakers up till the present day.

Most people who have tackled the D’Agapeyeff Cipher have started from the same point. They’ve assumed that it’s a genuine code rather than a hoax, and they’ve assumed that it was created using one or more of the techniques described in the book. Both those assumptions are sensible, and most people who have tackled the cipher have been well aware that there’s a small but real chance of one or both of those assumptions being wrong. There’s also a chance that D’Agapeyeff, who wasn’t a professional cryptographer, made a mistake somewhere in his coding.

If you’re starting from those assumptions, then you need to know which types of code D’Agapeyeff described in the book. This is the point where you move from the modern world back into a very different time. Most of the people who’ve made a serious attempt to crack the cipher own a copy of the first edition, for the simple reason that the book isn’t online. In case you’re wondering about simply scanning in the table of contents, so that other researchers can have easy access to the information about which codes D’Agapeyeff described, here’s why that approach doesn’t get you very far. This is the table of contents for the first edition of Codes and Ciphers.

So, when Gavin decided that he wanted to join Robert Matthews and Gordon on another attempt at the D’Agapeyeff Cipher, one of his first tasks was to buy a copy of Codes and Ciphers. His second task, when the book arrived, would be to work through it systematically, making notes on which codes were mentioned, so that we could put that information online as a resource for other researchers.

In the next episode, we’ll tell the story of what happened when Gavin created his own table of contents.

6 thoughts on “A very British mystery, part 2: The D’Agapeyeff Cipher, and the first edition”